The Malaysian Anti-Corruption Commission (MACC) has raided the offices of Maika Holdings in Klang and its company secretary in Brickfields.

SIDAMBARAM, Kirthiga
The Malaysian Anti-Corruption Commission (MACC) has raided the offices of Maika Holdings in Klang and its company secretary in Brickfields. The graft busters have seized several documents in its investigation of the company over allegations of corruption and abuse of power.

According to news portal The Malaysian Insight, there will be more raids to come as authorities widen the probe into the company which has been at the centre of one of the most controversial Indian-related issues in our country's history.

The Maika scandal began in the 1980s but got into the public eye again this year when Sarawak Report disclosed documents alleging millions of ringgit had been channelled to the company's former CEO and current MIC secretary-general, S. Vell Pari, from 2003 to 2009. Many young people today aren't aware of just how much pain the Maika scandal caused the Indian community. Here's a brief chronology of the events around Maika Holdings, and its eventual collapse:

1982 - Maika Holdings is established by former MIC President Tun S. Samy Vellu as an effort to increase Malaysian Indians' economic participation and to lift the community up from poverty.

Around RM106 million is raised by selling shares 66,000 investors. Nearly 70% of them are low-income earners, many of them Indian estate workers who pawn their family jewellery and withdraw their life savings, according to The Star. The investments fail to return a profit.

1990 - A RM50 million loan is taken to buy 10 million shares in Telekom Malaysia upon its stock market listing. However, only one million shares are actually bought by Maika. The rest are divided equally among three companies -- SB Management Services Sdn Bhd, Advanced Personal Computers Sdn Bhd, and Clearway Sdn Bhd -- under the influence of Samy Vellu.

2010 - Maika Holdings fails return a profit due to 'bad investments' and is liquidated in an effort to get some money back for shareholders.

2012 - Maika Holdings sells its 74% ownership of Oriental Commercial Assurance (OCA), an insurance firm, to Tune Group for RM153 million. Renamed Tune Assurance, the firm is listed on the stock market and grows to a market value of RM1.2 billion in one year.

2013 - Industrialist and Westport chairman Tan Sri G. Gnanalingam sets up G Team Resources & Holding Sdn. Bhd, ostensibly to be a 'white knight' that steps in to fix the Maika problem.

2015 - G Team pledges to repay Maika shareholders who have yet to surrender their shares' from the profits received through the insurance firm transaction. That repayment never materialised. 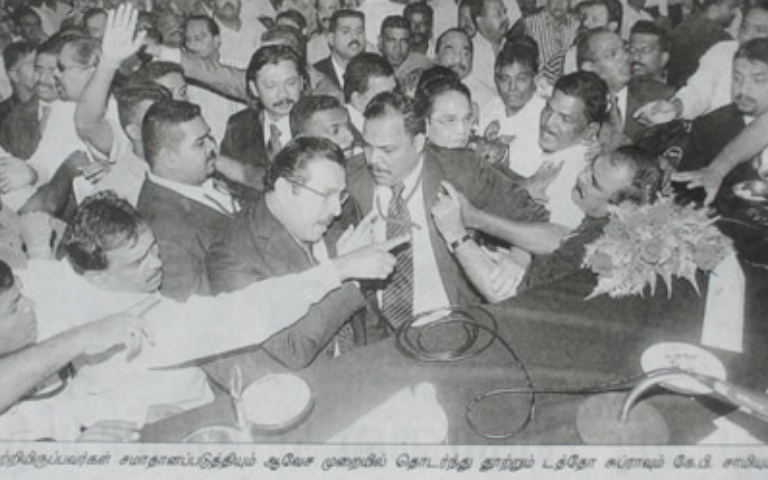 The Maika Holdings saga was and continues to be a source of immense pain and misery for thousand of Malaysia's Indians - many of them among the poorest people in the community. It's not just money, property and jewellery that was lost, it was hopes and dreams that were crushed. Many of those that bought the company's shares have fought for years to get their money back; some of them can't even be traced or have long passed away.

From Datuk Seri to Money Laundering: The Fall of Gnanaraja
This Photographer Captures Stunning Pictures of Madurai's Chitthirai Thiruvizha
Court: Having Sex with a Girl After a Fake Promise of Marriage is RAPE

This Gold Hearted Senior Citizen Shelters Her Former Neighbour, Who Has No Surviving Relatives

M Kamala, 71, may be surviving on little herself, but that has not stopped her from sheltering her former neighbour, Yap Su Vun, 87, after all his relatives passed on.

This is what the actor revealed during a recent interview...

Maestro AR Rahman will be releasing his debut production '99 Songs' this Friday. This is what he shared with journalists about how the movie took shape...

Check out the pictures taken during Bigg Boss S4 and Cooku with Comali S2 teams here...

ARR & Bigg Boss Mugen Are Among The Celebs To Join Cooku With Comali Finale!

These are the celebs who will be joining the Cooku with Comali grand finale...