From Datuk Seri to Money Laundering: The Fall of Gnanaraja

Gnanaraja, who pleaded not guilty, faces a maximum RM5 million fine or five years in jail if he is convicted.

SIDAMBARAM, Kirthiga
Just over five years after being bestowed a 'Datuk Seri' title by the Sultan of Pahang, businessman G. Gnanaraja is facing the prospect of being jailed for money laundering.

The businessman was today charged with 68 counts of money laundering, involving RM11.4 million, after being implicated in the Penang undersea tunnel scandal. This is the third big blow for the businessman, who is married to Datuk Geethanjali G, after his title was revoked last week amidst legal charges of cheating.

According to the charge sheet read out in court today, Gnanaraja allegedly transferred money from bank accounts to two government organisations, 26 companies, and 10 people from July 2017 and to January 2018. The money was allegedly from illegal activities. According to a report in The Star, the highest payment was of RM2.2mil to the Home Ministry and RM2.4mil to Matthew Ong & Associates. 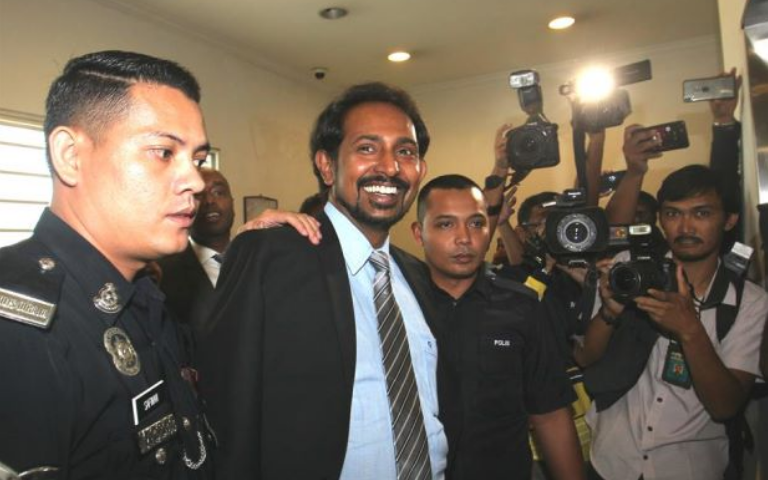 Gnanaraja, who pleaded not guilty, faces a maximum RM5 million fine or five years in jail if he is convicted.

DPP Allan Suman Pillai requested for the court to set a bail of RM50,000 for Gnanaraja and for him to surrender the title to a piece of land as part of the bail conditions. Gnanaraja's lawyer, Datuk Geethan Ram Vincent, agreed to the bail amount. The latest charges come after the businessman was on April 3 accused of deceiving and cheating Consortium Zenith Construction's managing director Zarul Ahmad Mohd Zulkifli into paying him RM19 million on three occasions by claiming he was able to 'settle' the Malaysian Anti-Corruption Commission's (MACC) investigation into the RM6.3 billion undersea tunnel project. The April 3 charges come with a possible sentence of up to 10 years in jail with whipping and a hefty fine.

Gnanaraja and his wife, Datuk Geethanjali G, have been accused of fraud previously. In 2016, MIC treasurer-general S Vell Paari accused the couple of cheating RM2.2 million via their forex investment company. But the couple denied the accusation and released a press statement that their firm had the necessary funds and would return the RM2.2 million in full.