In appreciation of its recent win at the Putra Brand Awards 2020, Astro is pleased to extend free preview of selected movie channels on TV and Astro GO to all Astro customers from 11 to 21 February 2021.

Shuman
In appreciation of its recent win at the Putra Brand Awards 2020, Astro is pleased to extend free preview of selected movie channels on TV and Astro GO to all Astro customers from 11 to 21 February 2021.

These include popular Hollywood blockbusters like Birds Of Prey And The Fantabulous Emancipation Of One Harley Quinn and Spider-Man: Far From Home on HBO, and Bad Boys for Life and Little Women on Fox Movies.

Children can look forward to watching popular animation Despicable Me 2 and action-adventure comedy Sonic The Hedgehog presented by HBO while fans of Korean movies will be able to catch the hottest stars on tvN Movies, including Train To Busan’s sequel Peninsula, Okay! Madam, Tazza: The High Rollers and Love + Sling.

In addition, Astro customers can also enjoy complimentary viewing of all Kids Pack and News channels (except for SKY News) till 18 February and HITS Movies HD (CH401) featuring blockbusters from the ‘60s to the ‘90s such as Jaws 3-D, Edward Scissorhands and Back To The Future on TV and Astro GO till 21 February 2021.

A retired hitman is forced on the run and finds himself hunted by his ultimate adversary - a younger clone of himself.

In this fantasy adventure film, Robert Downey Jr. ('Iron Man,' 'Sherlock Holmes') stars as the famed doctor and veterinarian who can talk to animals.

Peter decides to leave super heroics behind for a while to join his friends on a vacation. However, his plan is quickly scrapped when he agrees to help uncover the mystery of several elemental creature attacks.

The paths of Harley Queen, Huntress, Black Canary and Renee Montoya collide and the foursome team up to protect a young girl, Cass, against Gotham’s most narcissistic villains.

After surviving the zombie outbreak in South Korea four years ago, Jung-seok now returns to the quarantined peninsula for a covert operation.

A series of spectacular evil crimes has risen and former super-villain Gru has been recruited to find out who is responsible for them.

Based on true events in the Battle of Midway, the film tells story of the leaders and soldiers who used their instincts, fortitude, and bravery to overcome the odds during World War II. Miami detectives Mike Lowrey and Marcus Burnett must face off against a motherand-son pair of drug lords who wreak vengeful havoc on their city.

A married couple unwittingly become involved in a rescue operation of a hijacked aircraft during their first-ever family trip abroad to Hawaii.

After losing his entire savings in an illegal, backroom card game, Goni discovers it was a set up and sets out to get his money back by any means necessary with the help of veteran gambler Mr. Pyeong.

Christopher Nolan directs an exceptional cast in this sci-fi action film that travels around the globe and into the intimate and infinite world of dreams..A thief who steals corporate secrets through the use of dream-sharing technology is given the inverse task of planting an idea into the mind of a CEO.

Jo March reflects back and forth on her life, telling the beloved story of the March sisters - four young women, each determined to live life on her own terms.

An NYPD detective is thrust into a citywide manhunt for a pair of cop killers after uncovering a conspiracy. As the search intensifies, the authorities close all 21 bridges to prevent the killers from escaping Manhattan.

The (mis)adventures of Sonic as he navigates the complexities of life on Earth with his newfound human best friend. Together, they must stop Dr. Robotnik from using Sonic's immense powers for world domination.

Despite having zero interest in the sport, Sung-woong trains to become a top wrestler with his dad's enthusiastic support. When the girl he likes falls for his dad, they begin wrestling for love. 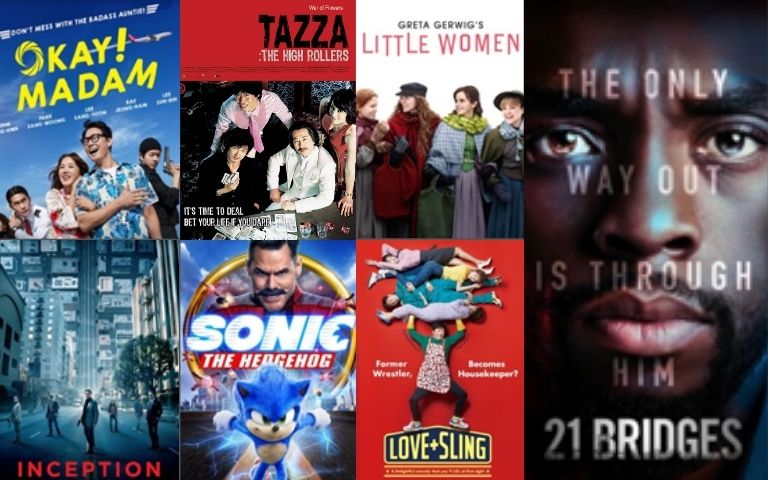 Note: Astro customers can also stream the movies on Astro GO throughout the free preview period (except for FOX Movies, FOX Action Movies HD and FOX Family Movies HD, which are only available on TV).
#Astro#Lifestyle