mag
Astro Seithigal is looking to connect with its audience and learn what they think about the various social, political, and economic issues in Malaysia. A poll question will be released every week, and the result will be announced in the news a day later. Find this week's poll here: 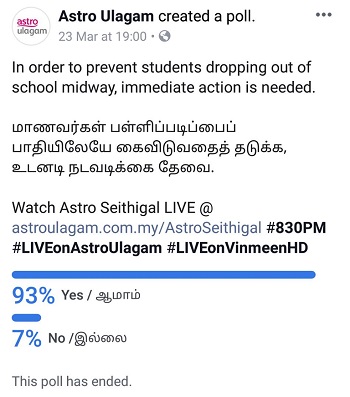 Want to know the latest happenings around Malaysia and across the globe? Watch Astro Seithigal LIVE everyday at 8.30PM here:

RAAGA has introduced 'Makkalukku Makkal', a community initiative that puts donors and volunteers directly in contact with those in need of assistance or support during the Full Movement Control Order (FMCO).

A group of young inventors from Johor have won the gold medal in an international science competition, with their creation of gloves made out of banana leaves.

A trio of Johor policemen are winning netizens' hearts after they went the extra mile to save a dog which had given them companionship, for more than a year.

Yeshmitha Murugan is only eight, but she can do mental arithmetic involving eight digits and more, with ease. Not content with this, the little whiz is upgrading her skills during the current lockdown.

Putrajaya is considering including children aged between 12 and 17 in the fifth phase of the National COVID-19 Immunization Program, Health Minister Dr Adham Baba has said.

A great-granddaughter of Mahatma Gandhi has been sentenced to seven years in jail by a court in Durban, South Africa, over fraud and forgery.

Squash Queen Nicol David To Get Her Own Biopic

Retired squash champion Nicol David is set to get her own biopic soon.